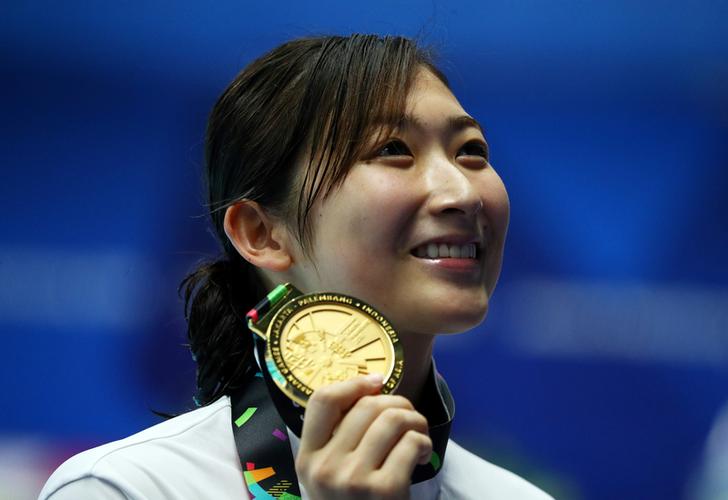 TOKYO – Japanese swimmer Rikako Ikee, who was diagnosed with leukemia earlier this year, and was released from the hospital on Tuesday and is aiming to take part in the medal at the Paris 2024 Olympics. She will not be participating in the upcoming 2020 Tokyo Olympics.

Ikee entered the world of Asian Games last year at the age of 18, winning a record of six gold medals in swimming and set the record for the year’s fastest time in the world at the 100 meters butterfly.

It is a big medal hope for Japan, the host of the upcoming Tokyo Olympics 2020, but Ikee was diagnosed with leukemia this year in February (2019).

“Finally, I get out of hospital,” she wrote on Twitter. “There were times when I felt strong nausea from the medication, but I kept telling myself ‘it’s OK, it will end at some point. It has been hard, long days but I have lots of encouragement and now want to go back to my life.”

Ikee, whose gold medal was the most for a female athlete in a single Asian Games, also picked up two relay silvers to match in North Korean shooter So Gin Man’s record tally of eight medals.

Ikee said she is still waiting for approval from her doctor to start swimming training again, but she is doing basic training already.

Ikee holds Japanese national records over 50, 100 and 200 meters in freestyle, as well as 50 and 100 meters in butterfly and was named Japanese Swimmer of the Year in 2018.

Effective ways to prevent from getting COVID-19 An American doctor is proving that if we follow only these four simple ways, we have a high chance of not getting the deadly COVID-19.

Lack of snow delays opening of Hokkaido ski slopes A lack of snow is preventing some ski resorts in the northern Japanese prefecture of Hokkaido from opening.

Foreign nationals who are permitted to work in Japan and those who are not "The Immigration Control and Refugee Recognition Law" prescribes fundamental regulations concerning entry of foreign nationals for the purpose of working in Japan.

Swimmer Ikee has been discharged from a 10-month hospitalization due to leukemia Japanese swimmer Rikako Ikee, who was diagnosed with leukemia earlier this year, and was released from the hospital on Tuesday and is aiming to take part in the medal at the Paris 2024 Olympics.

ABOUT YOUR RESIDENCE TAX Foreign residents in Japan are required to pay tax to the municipality in which they reside as of Januray 1st.

Tokyo outlines timetable for flying cars and bases on Mars Quantum computing will reach the practical stage by 2035, and human outposts will be established on the moon and Mars by 2040, an institute under Japan's science ministry predicts.

The government will require mobile carriers to remove the SIM locks immediately TOKYO - The government said on Tuesday they will ask mobile phone companies to allow customers to transfer to other carrier easily by allowing "sim free" handsets from the beginning which preventing them from moving to other network.

Falling rock from Mt. Fuji cause the death of a 29-year-old woman A Russian national who was climbing Mt. fuji has died after she was hit by falling rocks.

Stalker mixed urine into face lotion While Japan has a reputation for being one of the safer countries in which to live, there are certain worrying trends when it comes to stalking.

Funny Stupid Questions 🙂 It can be very annoying and just plain stupid, making you wonder if the person asking the question is in their right mind.

What are dog owners require to do when planning to have a dog? Owning a dog, or a pet, in Japancan be a very complicated process. The actual process of getting a pet and keeping them in your house/apartment is simple enough but it’s difficult to be done officially.

Table Manners in Japan Here are some etiquette you should learn when you're living here in Japan to build good relationship with Japanese people.

Japanese Onsen Etiquette Have you ever visited an Onsen before?

Bicycle Rules in Japan Read for your safe bicycle riding.

10 Essential Chopstick Etiquette Here are some chopstick etiquettes that we should learn to avoid trouble!

Why take the JLPT? Is it worth it?

Thousands of foreign students AWOL from a university The Japanese government is taking an action on one of universities because of its loss of track or contact with more than a thousand of their foreign students.

Man, pushed onto the tracks because of the loud sound coming from his earphone Japanese rail companies are known for the execution of "manners campaigns" where they consider the comfortability of passengers during transport.

Lawmakers to pursue childcare leave for men in Japan Lawmakers from the governing Japan's Liberal Democratic Party have formed a group to consider ways to encourage men to have a "childcare leave".

Labor minister disagree on banning "female dress codes with high heels" According to a labor minister's statement on Wednesday, he did not support the protest about banning a dress code where women need to wear high heels at work.

Woman arrested after hiding husband's corpse in the apartment for 4 months According to police in Tokyo, they arrested 53-year-old woman in suspicion that she had abandoned her 72-year-old husband after she left his corpse in their private apartment in Edogawa Ward four months ago.

Teacher admits molestation of 11 year-old girl due to 'work stress' The Tokyo Metropolitan police arrested a high school teacher due to molestation of 11-year-old student at a toilet park, according to Sankei Shimbun on June 5.

’Reiwa' as new era name From yesterday, Monday, the topic of every citizen in Japan is the word "reiwa". This was the Japanese government's choice to be the name of the new era that soon will be led by Crown Prince Naruhito from May 1.

Are you ready to have a baby? Read this, it can help you somehow.. Are you ready for a baby? It helps you answer that question after reading these six things about having a baby.

"I forgot my baby at the airport!" ; plane forced to return to gate due to this rare emergency case According to Gulf News on Monday, an unusual event on a life of a pilot happened when he needed to return to the airport of Jeddah, Saudi Arabia not due to plane trouble but because of his passenger leaving a baby inside airport.

Is "death option", should be the appropriate thing to suggest to the patient without terminal illness? This is one of the hot issues today. Suggesting to stop the patient's dialysis means either giving a death sentence.

Good news: Bill to lower phone fees approved Last Tuesday, Cabinet Prime Minister Shinzo Abe agreed to change some systems of mobile services and lower its bills. Because it says that Japanese mobile companies are in high cost compared to other countries.

5G Services expected by 2020 Three major mobile carriers and the e-commerce operator Rakuten Inc. has applied for the allocation of the mobile frequency band to introduce the next generation of 5G wireless services.

Japan Trench Quake According to Japan's panel of government, the possibility of a 7.0 magnitude earthquake in Japan Trench is 90% over the next 30 years.

Same sex couples in Japan, appealed to the marriage ban! This month of February, valentines day, nine pairs of couples / lovers filed a lawsuit against the government because of the current system that hinders their freedom to marry their partner in the same sex. Persecution has been filed in several districts of Tokyo and Osaka. And as soon as possible, the plan to bring prosecution also in Sapporo district in northern Japan and Nagoya in central Japan.

Loan-based Scholarship
Highly communicative caregivers are in demand in Japan! According to Japan Today, a foreign student from Taiwan named Chen Wan-xuan is one of many foreign students who received loan-based scholarship from Japan government.

Q： I am planning to apply for "Permanent Resident" visa. Please let me know if there are points to be aware of. Tell me admin！

Here are some 'Traits of a Good Marriage' Here is a summary of each of those characteristics.
PR