Japan Self-defense force car, fell from a bridge in Shiga

SHIGA – This afternoon, 11th of April, a Self-Defense Forces vehicle fell from a bridge on a national highway in Takashima City, Shiga Prefecture. 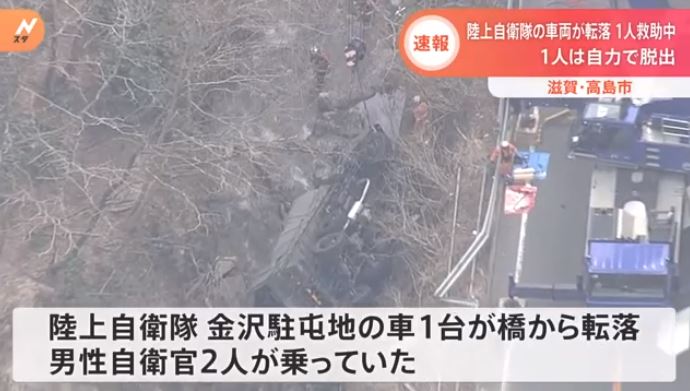 Shortly after 1:00 p.m. today, a police officer patrolling nearby discovered that a vehicle belonging to the Kanazawa Garrison of the Japan Ground Self-Defense Force in Ishikawa Prefecture had fallen from a bridge on a national highway in Takashima City, Shiga Prefecture.

The car was occupied by two male Self-Defense Force officers from the Kanazawa Garrison. The driver got out of the car on his own, but the passenger was trapped in the car and police and others are working to rescue him.

According to the police, it is believed that the car failed to complete the curve and fell under the bridge, and they are investigating the possibility that the driver may have been driving too fast.