The number of new cases of the new coronavirus on the 6th exceeded 45,000 for the first time in almost two months, and all 47 prefectures had more cases than the same day of the previous week. 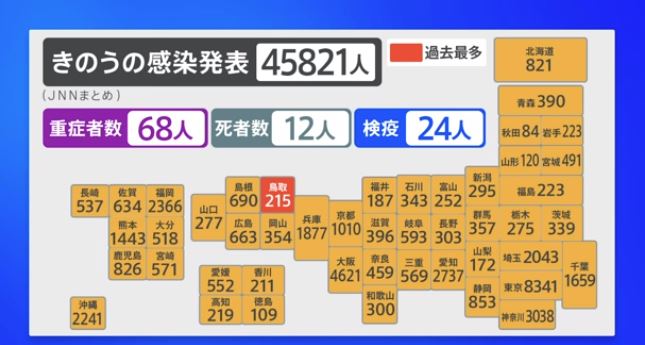 The Tokyo Metropolitan Government announced 8,341 new cases of infection on June 6. This is an increase of 4,538 cases from last Wednesday, and for the second day in a row, the number of cases has doubled compared to the same day of the previous week. This is the first time in almost three months that the number of new cases has exceeded 8,000.

Nationwide, the spread of infection continues, with a total of 45,821 cases announced on the 6th, the first time in almost two months that the number of cases has exceeded 45,000, with all prefectures exceeding the same day of the previous week, including Tottori, which has the highest number on record.

The number of infected people hospitalized and considered “seriously ill” is 68, and 12 new deaths have been announced.