The total number of people infected with the new type of coronavirus in Japan exceeded 10 million, according to JNN, with 97,788 new cases announced yesterday, close to 100,000. 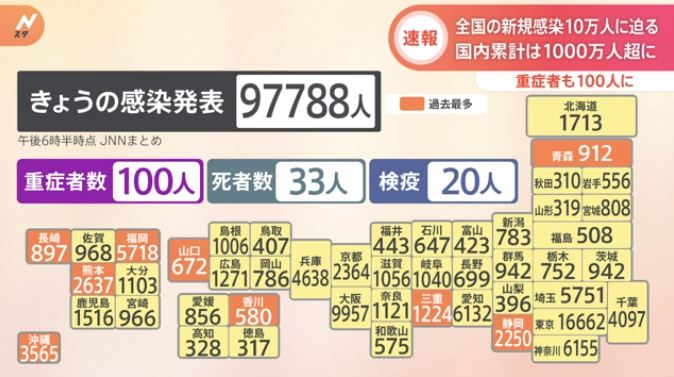 The Tokyo Metropolitan Government announced 16,662 new cases of infection yesterday. This is an increase of 8,133 cases over last Thursday and the 27th consecutive day higher than the same day of the previous week.

Nationwide, 97,788 new cases have been announced, bringing the total number of people infected in Japan to over 10 million, according to JNN’s tally. In addition, nine prefectures, including Okinawa, Fukuoka, and Kumamoto, have reached record highs.

Of the infected people hospitalized nationwide, 100 were considered seriously ill. This is the first time in approximately one and a half months since the end of May of this year that the number of seriously ill persons nationwide has been in the 100s.

The new death toll is reported at 33.