Bicyclist struck and killed by car at Hibiya Street crosswalk

TOKYO – On the afternoon of the 11th, a 55-year-old man crossing a crosswalk on his bicycle was struck and killed by a passenger car in Chiyoda Ward, Tokyo. 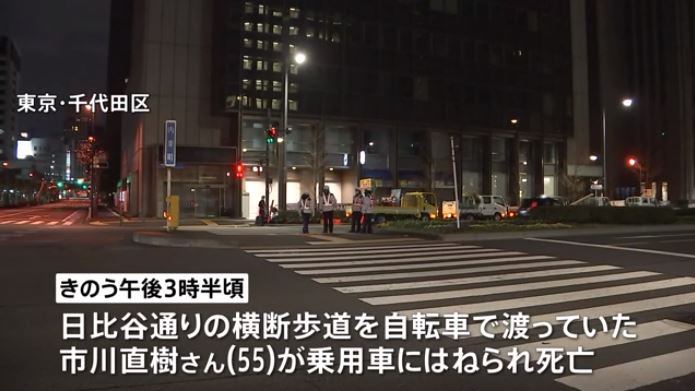 At around 3:30 p.m. on February 11, Naoki Ichikawa, 55, of Minato Ward, Tokyo, was crossing a crosswalk on his bicycle at the Hibiya Street intersection in Uchisaiwaicho, Chiyoda Ward, when he was struck by a passenger car going straight down the street, hitting him hard and killing him.

The Metropolitan Police Department has arrested Yusuke Shinjo, 29, a company employee in Minato Ward, on suspicion of negligent driving and injury.

When questioned, Shinjo admitted to his suspicions, saying, “There is no doubt about it,” and stated, “The bicycle suddenly came out from in front of the car in the other lane.”

The Tokyo Metropolitan Police Department is investigating the case as manslaughter by negligent driving.