Same sex couples in Japan, appealed to the marriage ban!

This month of February, valentines day, nine pairs of couples / lovers filed a lawsuit against the government because of the current system that hinders their freedom to marry their partner in the same sex. Persecution has been filed in several districts of Tokyo and Osaka. And as soon as possible, the plan to bring prosecution also in Sapporo district in northern Japan and Nagoya in central Japan.

Not only Japanese but other foreigners residing in Japan have joined together to fight equal rights in marriage. Group members aged 20-50 years old. 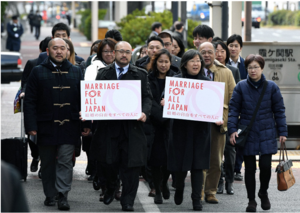 According to lawsuits, defendants refer to Article 24 of the supreme law, which states that marriage “shall be based only on mutual consent of both sexes” refers to marrying and not prohibiting marriage to both sexes. They disagree with the government’s refusal just to justify the definition of “husband” and “wife” written in the Civil Code or family Registry Act.

It is sometimes considered a “mental illness” of homosexuality. But in 1980 it was proven that it was not illness and did not need medical attention. In 2001 the United States and Europe recognized the law to allow the same sex. Since 2008 the United Nations Human Rights Committee has urged Japan to prohibit discrimination on sexual orientation.

It is also said that the Japanese system does not able to stand their marriage ban on both sexes with the two japanese married in Germany in September 2018. So they appeal to correct this error at the same time paying the fine. But according to their lawyer, “the real purpose of the lawsuit is that court judgment (current situation) is against the constitution”.

How to apply for My Number Card online? What should I do to apply? My Number or also called Kojin Bango (Individual Number) is a 12-digit ID number issued for every residents of Japan including foreign nationals. Now, it is possible to apply the card through Online application. Please follow the steps below to guide you through the process.

How to deliver packages using Rakuraku Mercari? Where can I buy the boxes? Aside from delivering packages by the Post Office, two other options are Rakuraku Mercari and YuuYuu Mercari delivery service. Convenience stores also accepts deliveries for easier transactions and deliveries.

How to deliver packages using Yuyu Mercari? Where can I buy the boxes? Aside from delivering packages by the Post Office, two other options are Rakuraku Mercari and YuuYuu Mercari delivery service. Convenience stores also accepts deliveries for easier transactions and deliveries.