Gifu: Filipino, arrested on illegal lending of money “Yamikin” and getting a passport as collateral 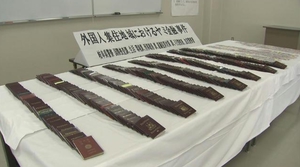 A citizen of Kani shi Gifu was arrested on February 18 for illegal lending of money and obtaining passports and bank card loans as collateral without any consent or permit issued by the Japanese government.

The Filipino who was arrested was Edwardo Ando Canteros, 48 ​​years old. Owner by a diversified store in Gifu. He will be filed a lawsuit against the Money Lending Business Law because of the unauthorized lending, putting a very high interest rate on the limit and obtaining a passport of loans which are strictly prohibited because the passport is owned by the government and no one can withheld it.

This tip came to authority as he was likely lending 3 Filipino citizens a 330,000 yen and received 31,500 yen in interest beyond the so-called statutory interest set. The police investigated about this where 300pcs. of passports were found in his residence and other bank cards.

Canteros admitted the alleged illegal business. He was earlier arrested in January in the case of seling medicine from the Philippines without a permit and found hundreds of drugs in its store.