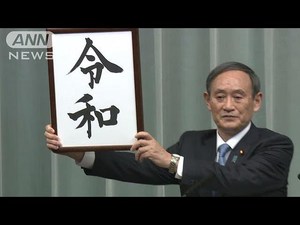 From yesterday, Monday, the topic of every citizen in Japan is the word “reiwa”. This was the Japanese government’s choice to be the name of the new era that soon will be led by Crown Prince Naruhito from May 1.

According to Chief Cabinet Secretary Yoshihide Suga, the “reiwa” is derived from Manyoshu, the oldest anthology of Japanese poetry that is still in existence.

This is a piece from the poet that can be translated as:

“Early in the spring, the air is fresh and the air is calm. The flowers are pretty blooming like a beautiful woman who puts white powder in front of the mirror and the fragrance of flowers is like the cloak with fragrant incense. “

Prime Minister Shinzo Abe said the name represents the hope that every Japanese will achieve their goals like a flower of enormous flourishing after the extreme winter.

He said, “The culture is nurtured when people are united with good hearts. REIWA means it.”

According to information received by NHK the government submits six names to the experts. The final decision was made by all ministers at a meeting of the Cabinet.

The Government has earlier announced a new era for the sake of companies and other branches of government to prepare for it. This is essential such as health insurance cards, calendars and drivers’ licenses.

This is the first time that “rei” used in the name of the era. The second is “wa,” used 19 times.