1. Bicycle riders should use roadways, and should only use sidewalks under exceptional circumstances. 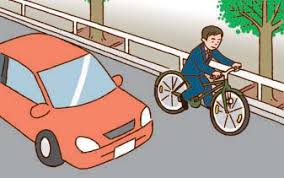 Bicycles are meant to be ridden on roadways. Most people ride their bicycles on the sidewalk and the police turn a blind eye. In fact, in the big city, we can say riding on the sidewalk makes a lot more sense in Japan.

PENALTY: 50,000 yen or imprisonment for up to three months.

2.On roadways, bicycle riders should keep to the left side

Bicycle riders should keep to the left side of the road.

PENALTY: 50,000 yen or imprisonment up to three months.

3.On sidewalks, bicycle riders should yield to pedestrians and go slowly. 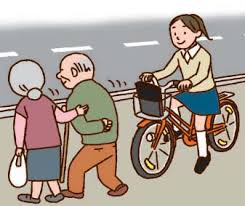 On sidewalks, bicycle riders should go slowly so that they can stop immediately. They should stop when their riding may block a pedestrian.

PENALTY: 20,000 yen or imprisonment up to three months.

–Riding on a bicycle while drunk is prohibited. PENALTY: 1 million yen or imprisonment up to 5 years.

–Riding double in a bicycle is prohibited except for a child under 6 years old. PENALTY: 20,000 yen or pecuriary penalty 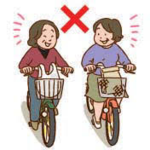 –Bicycle riders should have light on during evening hours. PENALTY: a fine up to 50,000 yen

–Bicycle riders should obey the traffic lights. Special traffic lights for pedestrians and bicycles should be complied with. PENALTY: a fine up to 50,000 yen or imprisonment up to 3 months.

–Bicycle should stop and check for safety at an intersection. Bicycle riders should obey stop signs and slow down before entering a wider road from a narrow road while checking for safety. PENALTY: a fine up to 50,000 yen or imprisonment up to 3 months. 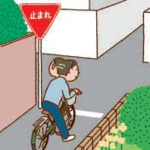 5.Children on bicycles should wear helmets 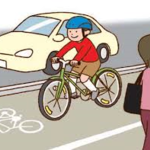 Guardians of children under 13 years old should instruct their children to wear helmets when riding on a bicycles. With adults, you’ll almost never see someone wearing a helmet. It’s not a law.

BICYCLE RIDERS SHOULD NOT:

1.Talk on (or operate) a mobile phone

The best thing we should do is to follow the rules to prevent engaging from any accidents. At the end, we will be the one to benefit from our own action.