In anticipation of the long awaited cherry blossom season, Weather News has released the “First Cherry Blossom Forecast” for 2022. The first cherry blossoms to open will be in Tokyo and Hiroshima on March 15, which is earlier than normal for the whole country. 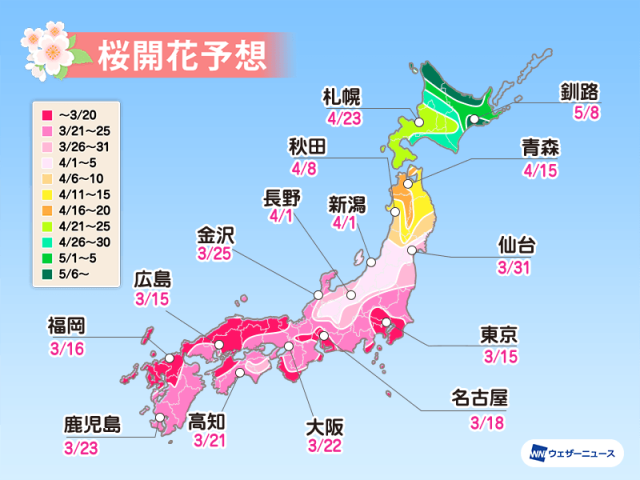 We have predicted the blooming dates based on more than 2 million cherry blossom reports received from the participants of the Sakura Project over the past 18 years, our own interviews with famous cherry blossom viewing spots, and weather forecasts such as temperature. Please refer to this page to find out when the cherry trees in your neighborhood will start blooming.

In 2022, the Someiyoshino cherry trees are expected to bloom in many areas earlier than normal.

Especially in eastern and northern Japan, it will be 5 to 10 days earlier than normal. This is about the same as last year’s record-breaking bloom across the country.

This is because the temperature in February and March will tend to be normal to high, and the buds of cherry trees will grow steadily. In particular, from March, we can expect more sunny and warm days, which will support the flowering process.

Ahead of the rest of the country, flowering will start in Tokyo and Hiroshima on March 15, followed by Fukuoka on March 16.

In late March, the flowers will begin to bloom in western and eastern Japan, and also in southern Tohoku.

The cherry blossom front is expected to arrive in Hokkaido in late April, blooming in Hakodate on April 21, Sapporo on April 23, and Kushiro on May 8.

How to apply for My Number Card online? What should I do to apply? My Number or also called Kojin Bango (Individual Number) is a 12-digit ID number issued for every residents of Japan including foreign nationals. Now, it is possible to apply the card through Online application. Please follow the steps below to guide you through the process.

How to deliver packages using Rakuraku Mercari? Where can I buy the boxes? Aside from delivering packages by the Post Office, two other options are Rakuraku Mercari and YuuYuu Mercari delivery service. Convenience stores also accepts deliveries for easier transactions and deliveries.

How to deliver packages using Yuyu Mercari? Where can I buy the boxes? Aside from delivering packages by the Post Office, two other options are Rakuraku Mercari and YuuYuu Mercari delivery service. Convenience stores also accepts deliveries for easier transactions and deliveries.