More than 28,000 people were newly infected in 46 prefectures nationwide, excluding Nagano, on the same day of the previous week.

More than 28,000 new cases of the new type of coronavirus were announced in Japan today (9th). 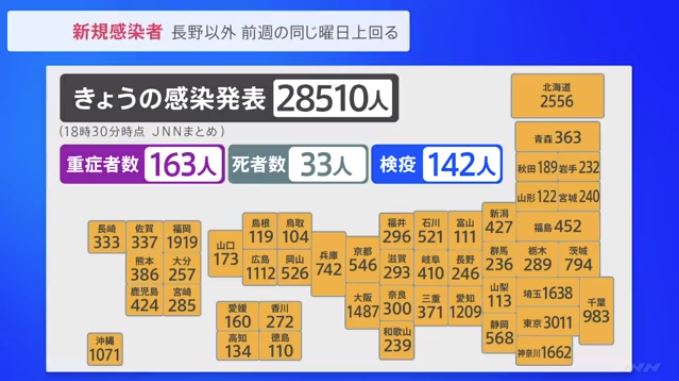 More than 28,000 people were newly infected in 46 prefectures nationwide, excluding Nagano, on the same day of the previous week. (JNN)

The Tokyo Metropolitan Government announced 3011 new cases of infection. This is an increase of 608 cases from last Monday, and for the third consecutive day, the number of cases exceeded that of the same day of the previous week. The Tokyo Metropolitan Government is urging active testing of the infected population, which is expected to increase after the major holidays.

Here is the number of new cases by prefecture. The number increased from last Monday in 46 prefectures except Nagano Prefecture.

The total number of infected people nationwide is 28,510. The number of seriously ill people increased by 4 from the 8th to 163. Thirty-three new deaths have been announced.