New Corona 9,572 cases nationwide, up from the same day last week in 33 prefectures

A total of 9,572 new coronavirus cases were confirmed nationwide yesterday, 27th of June. 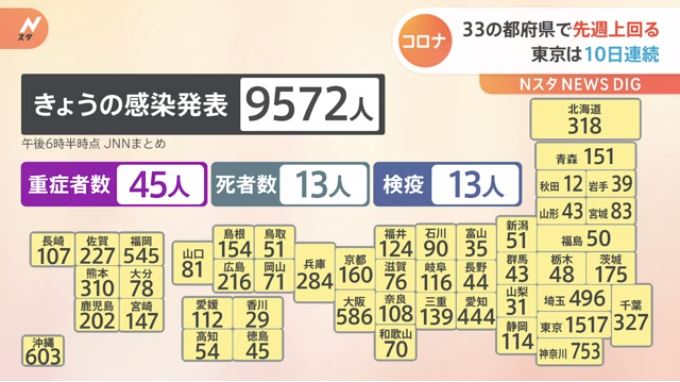 The Tokyo Metropolitan Government announced today that 1,517 new cases have been reported. This is an increase of 441 cases from last Monday, and is the 10th consecutive day that the number of cases has exceeded that of the same day of the previous week.

The average number of newly infected cases over the past seven days was approximately 2,080, an increase of nearly 30% from a week ago.

Meanwhile, the number of new cases increased from last Monday in 33 prefectures, including Kanagawa, Okinawa, Osaka, and Fukuoka, the second largest prefecture after Tokyo. The total number of newly infected persons nationwide has also increased by about 1,700 since last Monday.

Of the infected hospitalized nationwide, 45 are considered “seriously ill” and 13 new deaths have been announced.