42-year-old man sentenced to life imprisonment for murdering a man who was his relative with the intent to rob him of money and goods.

CHIBA – The Chiba District Court sentenced a man accused of killing a man who was his relative at a house in Ichihara City, Chiba Prefecture, last April to life imprisonment. 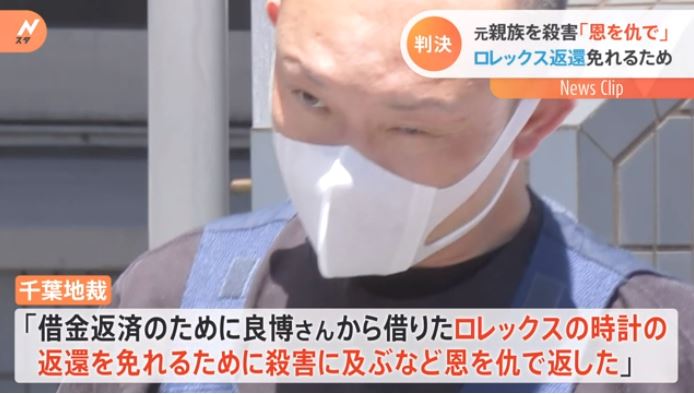 42-year-old man sentenced to life imprisonment for murdering a man who was his relative with the intent to rob him of money and goods. (TBS News)

Unemployed defendant Masahiro Naito, 42, is accused of robbery and murder, among other crimes, for stabbing Yoshihiro Muto, 74, a relative, in the chest with a knife in order to steal a gold necklace at a house in Ichihara City last April, and attempting to stab Yoshihiro’s son, 42, to death when he tried to stop him.

In yesterday’s ruling, the Chiba District Court ruled that “Naito quit his job without thinking about the future, even though he owed a large sum of money, and engaged in a series of makeshift actions.

In order to avoid the return of a Rolex watch borrowed from Mr. Yoshihiro to repay a debt, he avenged his debt to him by killing him.

The court then sentenced him to life imprisonment, stating that “the crime was extremely self-centered and selfish, and there was no room for extenuating circumstances.