A 29-year-old man was arrested for assaulting three junior high school students running in a park and taking their cash.

TOKYO – A 29-year-old man was arrested in Sumida-ku, Tokyo, for assaulting three junior high school boys who was running early in the morning and took their cash. 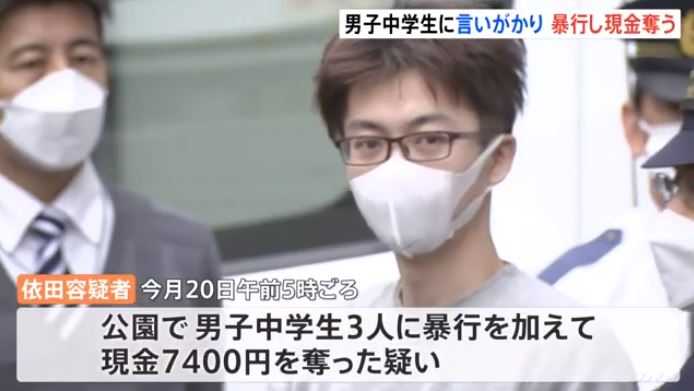 A 29-year-old man was arrested for assaulting three junior high school students running in a park and taking their cash. (TBS News)

Kazuki Yoda, 29, an unemployed man with no fixed address, was arrested on suspicion of robbery. He is suspected of assaulting three junior high school boys at a park in Sumida-ku, Tokyo, at around 5:00 a.m. on the 20th of this month, and taking 7,400 yen in cash.

According to the Tokyo Metropolitan Police Department, Yoda made a false accusation against the boys, who had gathered at a park for an early morning run, saying, “You guys are noisy,” kicked them in the face and stomach and made them sit on their knees, and threatened to make them pay.

After quitting his job last month, Yoda had been frequenting Internet cafes and was on his way to an acquaintance’s house when he committed the crime.

Upon questioning, he said, “I warned them because they are too loud” He denied some of the charges, saying, “I only accepted the money when they offered it to me.”