Woman falls from apartment, police officer attempts to catch her, woman seriously injured but not life-threatening.

TOKYO – A male police officer attempted to catch a woman on the ground after she fell from the third floor of an apartment building in Fuchu City, Tokyo. The woman sustained serious injuries, including a broken rib, but is expected to survive. 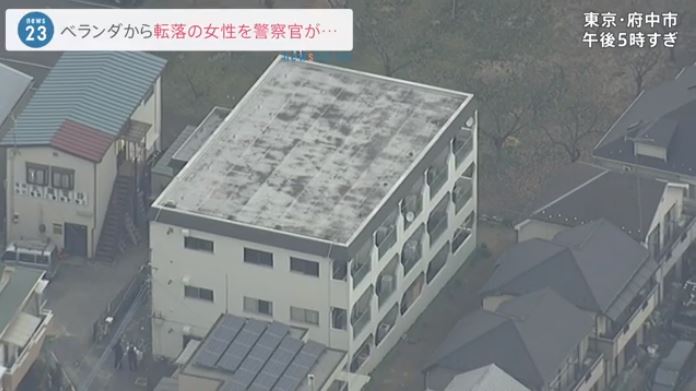 Just before 4:30 p.m. yesterday, a 110 caller reported that a woman was trying to jump off an apartment in Nishi-fu-cho, Fuchu City, Tokyo.

According to the Metropolitan Police Department, a male police officer in his 30s was on the scene when a woman in her 50s fell from the balcony of her third-floor room. The male police officer tried to pick her up, but she suffered a serious fracture of the ribs and was rushed to the hospital with non-life-threatening injuries.

The male police officer sustained minor injuries, and the Metropolitan Police Department is investigating the circumstances at the time in detail.