2 people, dead from slipping and falling at Mount Daisen

TOTTORI – Two climbers slipped and fell on the early morning of April 2 in Daisen, Tottori Prefecture, killing both climbers. Both climbers are believed to have slipped approximately 700 meters down the mountain. 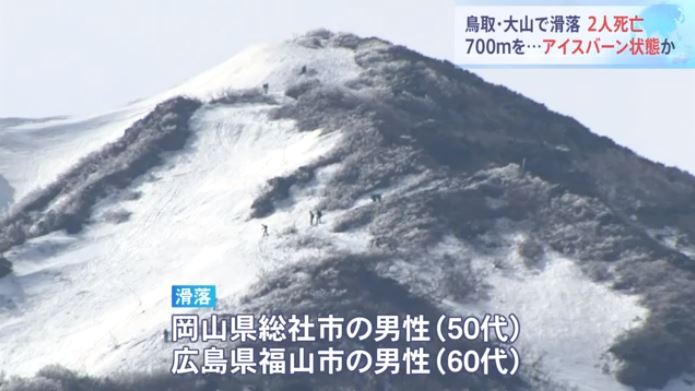 According to the police and fire department, at around 5:20 a.m. on April 2, another climber reported to the police that he saw two climbers slip and fall near the seventh station of the Summer Mountain Trail in Mount Daisen.

Both were lifted up and rescued by a Tottori Prefecture disaster prevention helicopter, but both were pronounced dead at the hospital where they were taken.

climber
It was already stiff and completely icy. The thermometer at the summit read minus 7 degrees Celsius.”

The trail at the site was icy at the time, and police are investigating the possibility that the two may have slipped.