The number of newly announced cases of the new coronavirus has reached nearly 50,000 nationwide, up roughly 1,800 from last Sunday. 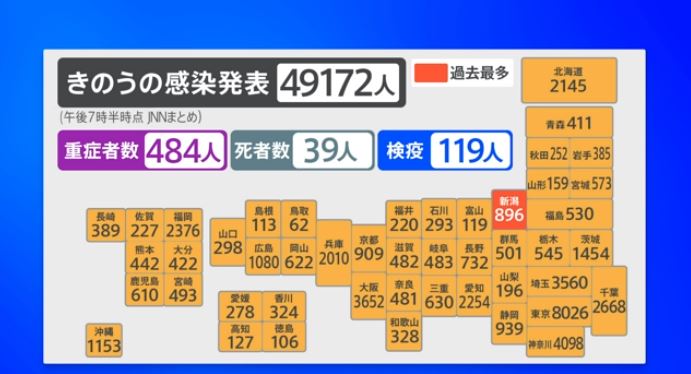 The Tokyo Metropolitan Government announced 8,026 new coronavirus cases for the 10th. This was 127 more than last Sunday, and for the fourth consecutive day, the number exceeded that of the same day of the previous week. The highest number of cases by age group was in their 20s, unchanged from the previous day, indicating that the number of young people infected is still high.

Meanwhile, the number of newly infected people nationwide is 49,172, according to JNN’s summary, with a record number of people per day being announced in Niigata. After Tokyo, Kanagawa, Osaka, Saitama, and Chiba have the second highest number of cases, in that order.

Of the infected hospitalized nationwide, 484 are seriously ill, and 39 new deaths have been announced.