A record number of 57,000 people have been infected with new corona nationwide in four prefectures, including Iwate and Niigata.

More than 57,000 new cases of the new coronavirus have been announced yesterday nationwide. 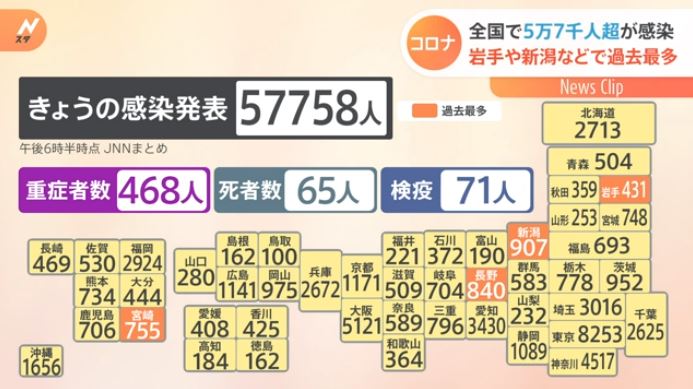 A record number of 57,000 people have been infected with new corona nationwide in four prefectures, including Iwate and Niigata. (N Star)

The Tokyo Metropolitan Government announced yesterday that 8,253 new cases of infection have been reported, the second consecutive day below the same day of the previous week. On the other hand, the average number of new cases per day over the past seven days was approximately 7,500, 102.4% of the number a week ago, and is on the increase.

Of the infected hospitalized nationwide, the number of those considered “seriously ill” is 468, and 65 new deaths have been announced.