22-year-old man arrested for dragging a police officer 1.5 kilometers on a motorcycle and fleeing.

OSAKA – A police officer was dragged by a motorcycle for approximately 1.5 km on a street in Higashiosaka City, and police arrested a 22-year-old man driving the motorcycle. 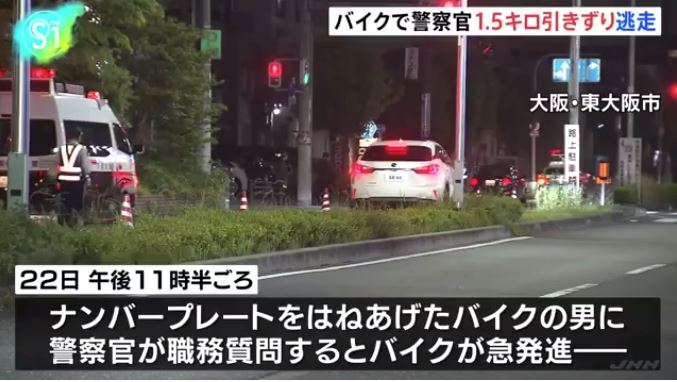 22-year-old man arrested for dragging a police officer 1.5 kilometers on a motorcycle and fleeing. (TBS News)

At around 11:30 p.m. on April 22, a police officer questioned a man on a motorcycle who had flipped off the license plate on a street in Higashiosaka City, and the motorcycle sped off.

The strap of a handgun of a male sergeant (33) got caught on the motorcycle and he was dragged for about 1.5 km. The sergeant sustained serious injuries, including broken ribs.

Police arrested Kanta Nagano, 22, a suspect of unknown occupation from Higashiosaka City, who was running away, on suspicion of attempted murder and other crimes.

Upon investigation, Nagano denied the charges, saying, “I ran away because I was afraid that I would be found out to be unlicensed.”