75-year-old man strangled his 73-year-old wife to death in their bedroom in Obihiro, Hokkaido

HOKKAIDO – A 75-year-old man killed his 73-year-old wife, who lives with him, in their home in Obihiro, and police are investigating the possibility that he committed the crime out of pessimism about their future together. 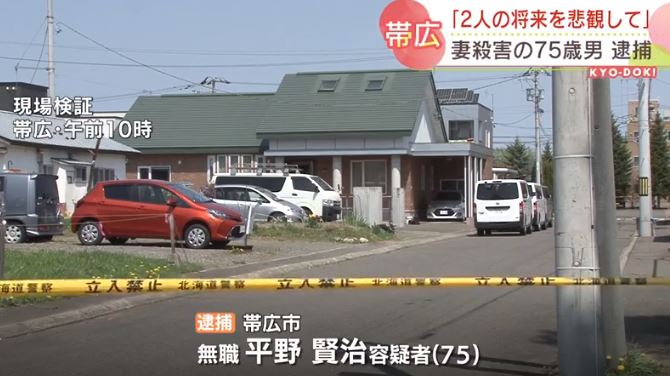 75-year-old man strangled his 73-year-old wife to death in their bedroom in Obihiro, Hokkaido (Kyo-Doki)

Kenji Hirano, an unemployed man in Obihiro, is suspected of strangling his wife, Toshie, to death in their bedroom at around 4:00 a.m. on May 4. Kenji himself reported to the police that he had killed his wife.

The police officers who arrived at the scene found Toshie lying on the bedroom floor. Toshie had strangulation marks on her neck.

The police, who have been inspecting the home and investigating the circumstances of the incident on May 5, are investigating the possibility that Kenji may have committed the crime because he was pessimistic about their future.