Nationwide Corona Over 45,000 cases of infection in all prefectures, up from the previous week, with record numbers in Miyazaki and Okinawa

More than 45,000 new cases of the new coronavirus were announced nationwide on the 11th. All prefectures exceeded the same day of the previous week. 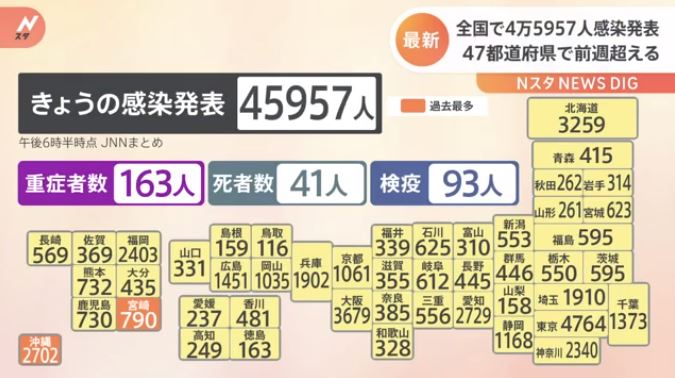 Nationwide Corona Over 45,000 cases of infection in all prefectures, up from the previous week, with record numbers in Miyazaki and Okinawa (N Star)

The Tokyo Metropolitan Government announced 4,764 new cases on May 11, 1,765 more than on the 4th of this month and higher than the same day of the previous week for the fifth consecutive day. The average number of new cases over the last seven days was approximately 3,680, 106.5 percent of the number a week earlier.

A total of 45,957 cases were announced in all prefectures in Japan. All prefectures have exceeded the 4th of this month, with record numbers in Miyazaki and Okinawa.

The number of infected people hospitalized nationwide who are considered “seriously ill” is 163, and 41 new deaths have been announced.