32-year-old mother arrested and sent to jail for murder for abandoning her baby.

EHIME – Last month, the body of a baby was found in a bamboo grove in Niihama City, Ehime Prefecture. On May 14, police arrested a 32-year-old mother on suspicion of murder and searched her home to investigate how the crime was committed and the motive. 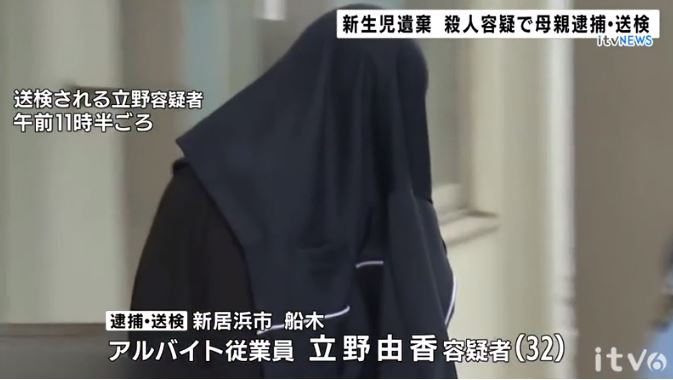 32-year-old mother arrested and sent to jail for murder for abandoning her baby. (itvNews)

Arrested and sent to prison on suspicion of murder was 32-year-old Yuka Tateno, a part-time employee of Funaki, Niihama City.

In this case, the body of a soon-to-be-born baby boy was found wrapped in a towel in a bamboo grove in Funaki, Niihama City on the 13th of last month.

The police subsequently discovered that the baby was not stillborn with the umbilical cord attached, but had died after birth, and by the 13th, a total of 2,400 investigators had been deployed to the case.

As a result of analysis of the surrounding security camera footage and DNA analysis, police arrested Tatsuno, who lives near the scene, on the afternoon of May 14, on suspicion that he had murdered the baby.

Tatsuno is single and has admitted to the police that there is no doubt about the charges.

The police have been searching Tatsuno’s home since May 14, investigating the circumstances of the crime and the suspect’s motive for committing it.