81-year-old wife arrested on suspicion of attempted murder for stabbing her 82-year-old husband with a kitchen knife.

AICHI – An 81-year-old wife was arrested on suspicion of attempted murder for stabbing her 82-year-old husband in the chest and other parts of his body with a kitchen knife in Nisshin City, Aichi Prefecture. 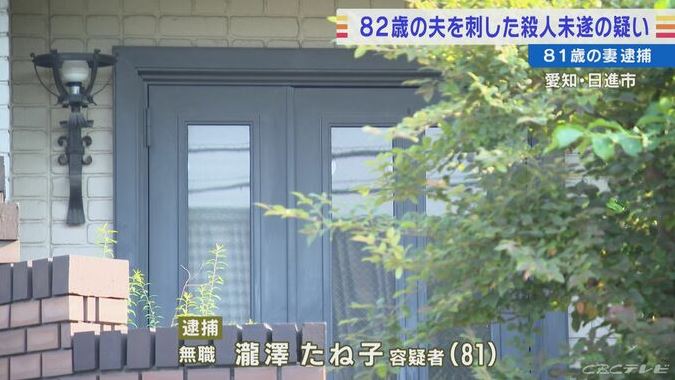 81-year-old wife arrested on suspicion of attempted murder for stabbing her 82-year-old husband with a kitchen knife. (CBC Terebi)

The suspect, 81-year-old Taneko Takizawa, an unemployed woman living in Nisshin City, was arrested. According to the police, the suspect Takizawa is suspected of attempted murder by cutting her 82-year-old husband’s neck with a kitchen knife and stabbing him in the chest and other parts between around 9:00 a.m. and 2:00 p.m. on May 18.

Her husband was rushed to the hospital, but he is conscious and is to survive.

The suspect, Takizawa, has admitted to the police that there is no doubt about the charge.

The suspect sustained injuries to both wrists, and police are investigating the motive, believing that Takizawa stabbed her husband and then cut herself.