Man in his 70s dies after being struck by a parked bus in Imizu City, Toyama.

TOYAMA – On the afternoon of May 22, a minicar rear-ended a parked bus in the city of Imizu. The driver of the minicar, a man in his 70s, was killed in the accident, and his wife, a passenger in the front passenger seat, is in critical condition. 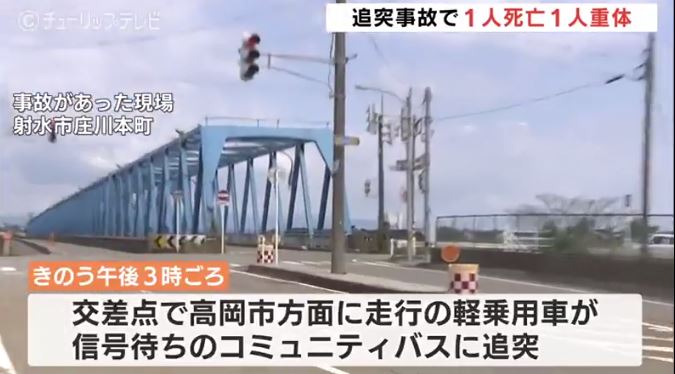 Man in his 70s dies after being struck by a parked bus in Imizu City, Toyama. (Tulip Terebi)

At around 3:00 p.m. on the 22nd, a minicar traveling in the direction of Takaoka City rear-ended a community bus stopped at a traffic light at a national highway intersection in Shogawamoto-cho, Imizu City.

The driver of the minicar, Mitsuo, 73, an unemployed man from Ki-cho, Takaoka City, was rushed to the hospital, where he was pronounced dead approximately three hours later.

In addition, Michiko, 85, Mitsuo’s wife, who was riding in the passenger seat, broke her thigh bone and is in critical condition.