FUKUOKA – A thief of coins appeared at a temple in Kurate Town, Fukuoka. The man was stealing coins right in front of the security camera. 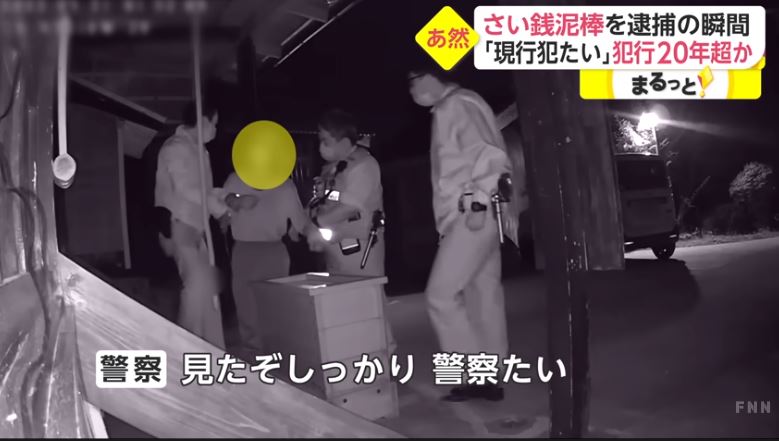 A man in a mask came to the temple at around 1:50 a.m. on the 21st. A light illuminated the figure, but he seemed to know where the switch was and quickly turned it off.

Then, taking a flashlight from his pocket, he shines it into the change box and locates the money.

The next moment he inserted a stick-like object and was about to steal it, three police officers surrounded the man and arrested him for attempted theft in the act.

A 61-year-old unemployed man was arrested.

He is believed to have been a punitive penny-pincher at this temple for more than 20 years.

Soken Sakamoto, chief priest of Fudoin temple, said, “He had been coming here for more than 20 years. I actually told him directly that I wanted him to stop coming.”

Although the priest had previously tried to persuade the man to change his mind out of compassion, the man ignored him.

The temple had filed a damage report after another theft of coins on May 17.

This time, the police officers who had been on the lookout for him were ordered to arrest him.

Soken Sakamoto, chief priest of Fudoin Temple, said, “I always thought it was very regrettable to take away the important money that believers and local residents have donated to the temple out of their feelings toward the Buddha.

The man admitted to the investigation, saying, “I am sure that I was having trouble making a living and tried to steal money.