Yesterday, 20,680 new cases of the new type of coronavirus were confirmed nationwide. 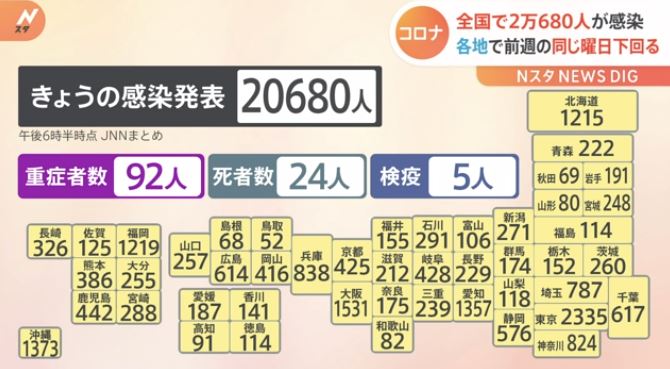 The Tokyo Metropolitan Government announced today that 2,335 new cases have been reported. This is a decrease of more than 1,000 cases since last Thursday, and is the 20th consecutive day that the number of cases has been lower than the same day of the previous week. The average number of cases for the last seven days is approximately 2,260, which is less than 70% of last week’s total.

The number of cases by prefecture was below the same day of the previous week in all prefectures. Nationwide, the total number of infected persons was 20,680, down more than 10,000 from last Thursday.

Of the infected hospitalized nationwide, 92 are seriously ill and 24 new deaths have been confirmed.