Man dies after being hit by a car, Driver’s friend, arrested for telling the driver to ignore the traffic signal.

ISHIKAWA – An old man was struck and killed by a car at an intersection in Kanazawa City. The driver was arrested as well as her passenger, for telling the driver of the car to ignore the traffic signal. 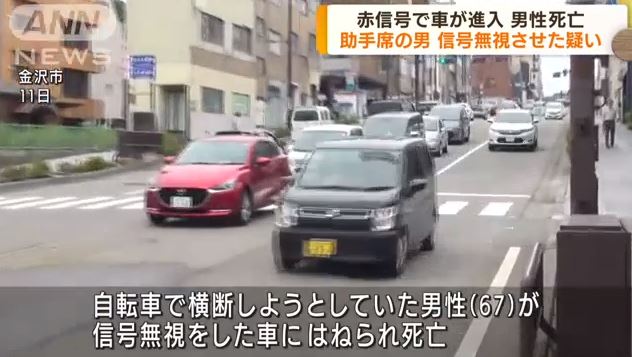 Man dies after being hit by a car, driver’s friend, arrested for telling the driver to ignore the traffic signal. (ANN News)

The accident occurred on June 11, when a 67-year-old man was crossing the street on a bicycle at an intersection in Kanazawa when he was struck and killed by a car that ran a red light. The driver of the car, Reiko Hasegawa, 46, was arrested on suspicion of manslaughter by dangerous driving.

According to the police, the suspect’s friend, Tasaka Terasaki, 30, who was riding in the passenger seat, was arrested on suspicion of abetting a dangerous driving causing death when Hasegawa was about to stop at a red light and told her to “go faster”

The suspect, Terasaki, denies the charge, saying he was asleep and did not give the order.