7,956 new cases confirmed nationwide, first time in about 5 months that the number of cases has dropped below 8,000.

Yesterday, 7,956 new cases of the new coronavirus were confirmed nationwide. 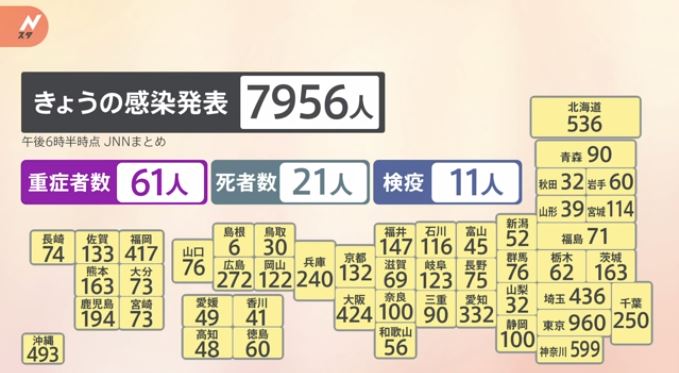 7,956 new cases confirmed nationwide, first time in about 5 months that the number of cases has dropped below 8,000. (N Star)

The Tokyo Metropolitan Government announced 960 new cases today. This is a decrease of 53 cases from last Monday and the 31st consecutive day below the same day of the previous week. This is the first time in about five months since January that the number of new cases has fallen below 1,000.

Nationwide, 7,956 new cases were confirmed today, falling below 8,000 for the first time in almost five months since January of this year, but higher than the same day of the previous week in 11 prefectures, including Saitama and Saga.

Of the infected hospitalized nationwide, 61 are seriously ill. Twenty-one new deaths have been confirmed.