Regarding the new corona, the number of “severe cases” in the hospital in Tokyo was announced as “0” for the first time. A total of 15,331 new cases were confirmed nationwide yesterday, 14th of June. 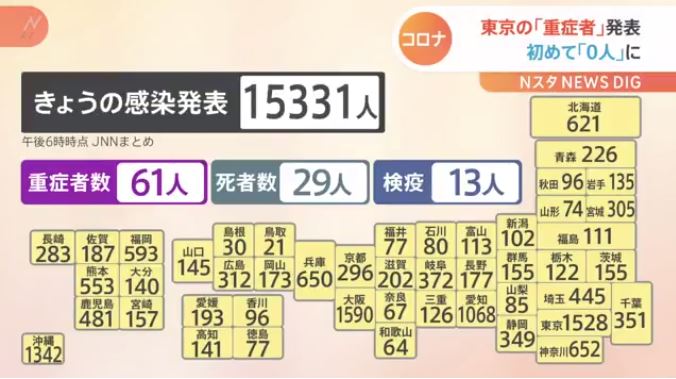 The Tokyo Metropolitan Government announced today that 1,528 new cases were reported, the 32nd consecutive day of the week and lower than the same day of the previous week.

In addition, the Tokyo Metropolitan Government has its own criteria for classifying infected patients hospitalized with pneumonia who are in serious condition and must be fitted with ventilators or artificial heart-lung machines as “seriously ill,” but today, for the first time, the number of “seriously ill” patients was zero.

According to the number of infected persons by prefecture, Osaka has 1,590, more than Tokyo.

Of the infected people hospitalized nationwide, 61 are considered “seriously ill”. As for new deaths, 29 have been announced.