15,384 people infected with new corona nationwide, up from the same day the previous week in 20 prefectures

Regarding the new coronavirus, 15,384 infections were confirmed nationwide today. 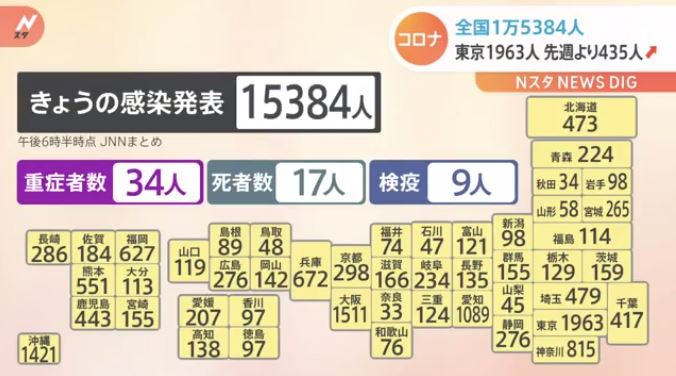 15,384 people infected with new corona nationwide, up from the same day the previous week in 20 prefectures (N Star)

The Tokyo Metropolitan Government announced today that 1,963 new cases of the new coronavirus have been reported. This is an increase of 435 cases from last Tuesday and is the fourth consecutive day that the number of cases has exceeded that of the same day of the previous week.

The number of infected people currently hospitalized who are considered “seriously ill” by the Tokyo Metropolitan Government’s criteria has been zero for six consecutive days, and no new deaths have been announced.

Nationwide, 15,384 cases have been confirmed, more than the same day of the previous week in 20 prefectures, including Kanagawa and Okinawa.

Of the infected hospitalized nationwide, 34 are considered “seriously ill” and 17 new deaths have been announced.