17,285 new cases of coronavirus infection nationwide, with many locations experiencing an increase of infection 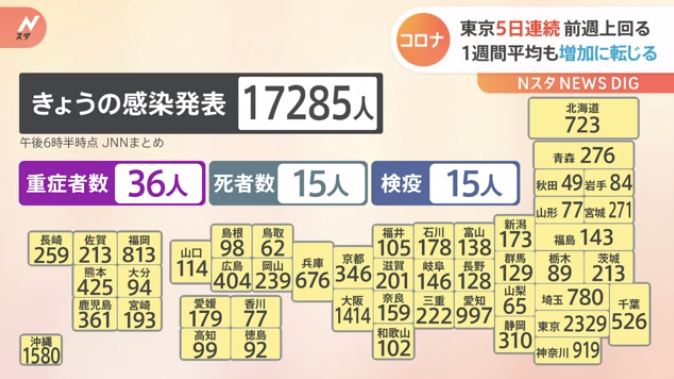 17,285 new cases of coronavirus infection nationwide, with many locations experiencing an increase of infection (N Star)

In Tokyo, the number of newly infected persons has exceeded that of the previous week for five consecutive days, and the weekly average has also started to increase. The Tokyo Metropolitan Government announced 2,329 new cases of infection on June 22. This is an increase of 314 cases from last Wednesday, and for the fifth consecutive day, the number of new cases has exceeded that of the same day of the previous week.

The number of new cases averaged over the last seven days was approximately 1,730, up 109.4 percent from a week ago.

The number of infected people by prefecture has increased from the same day a week ago in 25 prefectures, including Osaka, Fukuoka, and Okinawa, and the number of places where the disease is increasing nationwide. Of the infected hospitalized nationwide, 36 are considered “seriously ill,” and 15 new deaths have been announced.