Over 23,000 cases of corona nationwide confirmed; Tokyo raises alert level of infection by one level

The number of new cases of the new strain of corona exceeded 23,000 nationwide yesterday, up about 7,000 from a week ago. The Tokyo Metropolitan Government has raised its “alert level” to the second highest of four levels in response to the spread of infection. 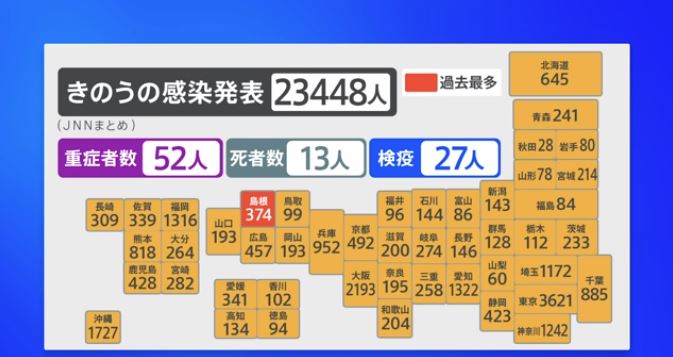 Over 23,000 cases of corona nationwide confirmed; Tokyo raises alert level of infection by one level (JNN)

The Tokyo Metropolitan Government announced yesterday that the number of newly infected persons was 3,621, a 7-day average of 1.4 times that of the previous week and the second consecutive week of increase.

At a monitoring meeting held yesterday, experts expressed concern that if the number of infected patients increases at this pace, the seven-day average could soar to 3,000 next week and 5,000 the week after that, which would have a major impact on medical care.

In addition, the Tokyo Metropolitan Government has raised its “alert level,” which was lowered only two weeks ago, to the second highest of four levels in response to the re-spread of the outbreak.

Meanwhile, the total number of infected people nationwide is 23,448, up approximately 7,000 from last Thursday.

Of those hospitalized, 52 are considered “seriously ill” and 13 new deaths have been announced.