Over 50,000 cases of corona nationwide, Tokyo doubled the number of infected for the 6th consecutive day compared to last week

Regarding the new coronavirus, more than 50,000 cases were confirmed in Japan on the 10th. Tokyo has doubled the number of infected people from the previous week for the sixth consecutive day. 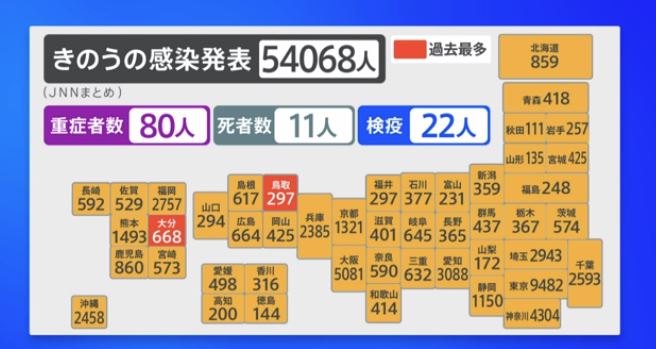 Over 50,000 cases of corona nationwide, Tokyo doubled the number of infected for the 6th consecutive day compared to last week (JNN)

The Tokyo Metropolitan Government announced 9,482 new cases of the disease on July 10, the second day in a row that the number of cases exceeded 9,000.

A total of 54,068 cases were announced in prefectures throughout Japan.

The number of infected people has more than doubled from a week ago, with Tottori and Oita recording record highs for the second day in a row.

The number of infected people hospitalized nationwide who are considered “seriously ill” is 80, and 11 new deaths have been announced.