76,012 cases of corona infection nationwide, a record number in 12 prefectures, Tokyo exceeding 10,000 for the first time in 4 months

Regarding the new coronavirus, 76,012 new infections were announced yesterday nationwide. 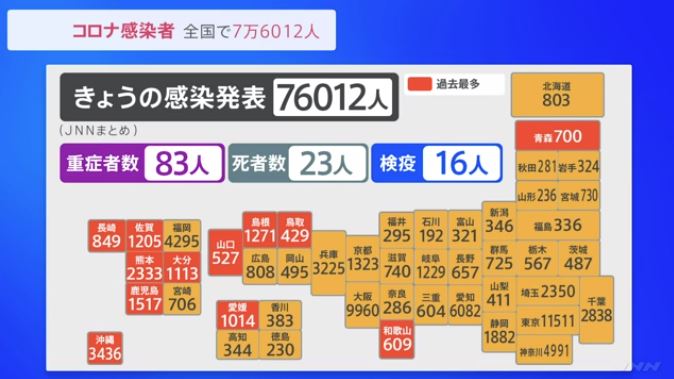 76,012 cases of corona infection nationwide, a record number in 12 prefectures, Tokyo exceeding 10,000 for the first time in 4 months (JNN)

The Tokyo Metropolitan Government announced yesterday that 11,511 new cases have been reported. This is an increase of 6,209 cases from last Tuesday and the first time in nearly four months that the number of cases has exceeded 10,000.

The average number of new cases over the past seven days was approximately 8,940, 2.4 times the number a week earlier.

Nationwide, 76,012 new cases have been announced. All prefectures exceeded the same day last week, and 12 prefectures, including Aomori, Tottori, and Shimane, have set new record highs.

Of the infected hospitalized nationwide, 83 are considered “seriously ill” and 23 new deaths have been announced.