94,493 people newly infected with coronavirus nationwide, a record number in 13 prefectures, the first time in nearly 5 months that the number has exceeded 90,000.

Yesterday, 13th of July, 94,493 new cases of the new coronavirus were announced nationwide, the first time in nearly five months since February 17 that more than 90,000 cases have been reported. 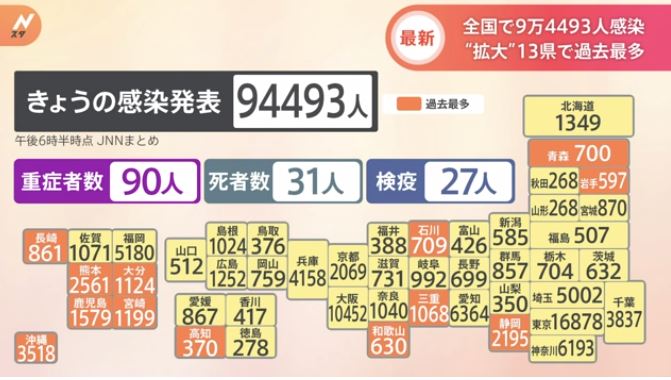 94,493 people newly infected with coronavirus nationwide, a record number in 13 prefectures, the first time in nearly 5 months that the number has exceeded 90,000. (N Star)

The Tokyo Metropolitan Government announced 16,878 new cases of infection today. This is the ninth consecutive day with 8,537 more cases than last Wednesday, more than double the number on the same day last week.

Of the infected hospitalized nationwide, 90 are considered seriously ill, and 31 new deaths have been announced.