A worker dies during inspection after being pinned under an elevator at a factory in Iga City, Mie Prefecture.

MIE – A male worker died after being trapped under an elevator at a Panasonic Group plant in Iga, Mie Prefecture. 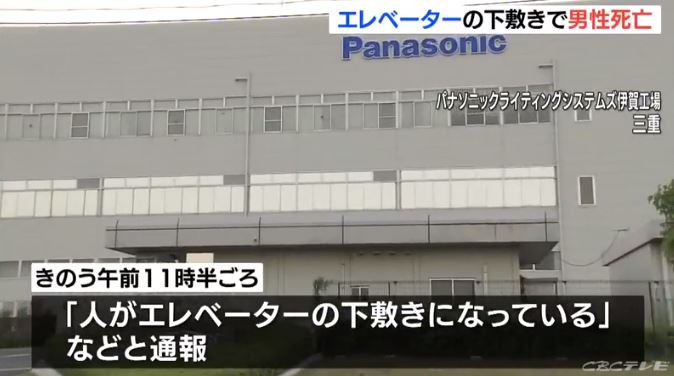 A worker dies during inspection after being pinned under an elevator at a factory in Iga City, Mie Prefecture. (CBC)

At around 11:30 a.m. on the 24th, a caller reported that a person was trapped under an elevator at Panasonic Lighting Systems’ Iga Plant in Yumeigaoka, Iga City.

When police and firefighters arrived, they found the man trapped between the elevator cage and the floor on the first floor of the three-story factory, where he was pronounced dead on the spot.

The deceased, Yoshiyuki Aoi, 54, of Otis Elevator Japan, a resident of Tsu City, was working alone in the elevator for a monthly routine inspection.

It is believed that Mr. Aoi was working on the first floor when the elevator cage fell for some reason, and the police are investigating the cause of the accident in detail.