Regarding the new coronavirus, a record number of 209,694 new cases of infection were announced nationwide on the 27th. 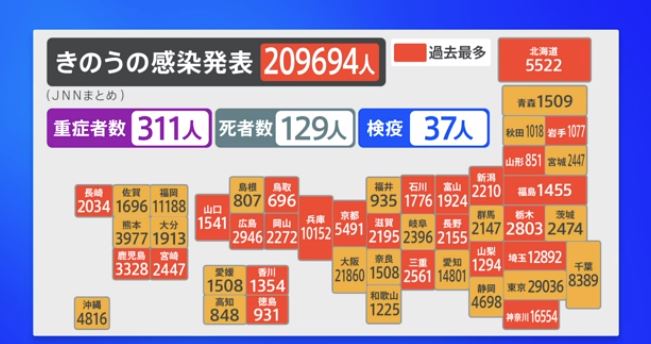 The Tokyo Metropolitan Government announced 29,036 new cases of infection on July 27, exceeding the same day of the previous week for the eighth consecutive day. The bed utilization rate for new coronas was 50.5%, exceeding 50% for the first time in almost five months.

A total of 209,694 cases were announced nationwide. This is an increase of more than 57,000 cases since last Wednesday and a new record high.

Forty prefectures had more than the same day of the week in the previous week, and 25 prefectures, including Kanagawa, Saitama, and Hyogo, had the most ever.

The number of “seriously ill” infected patients hospitalized nationwide is 311, and 129 new deaths have been announced.