OSAKA – On August 1, a 74-year-old man of Korean nationality was arrested in Ikuno Ward, Osaka City, for hitting and killing a 1-year-old girl with his car and fleeing the scene. 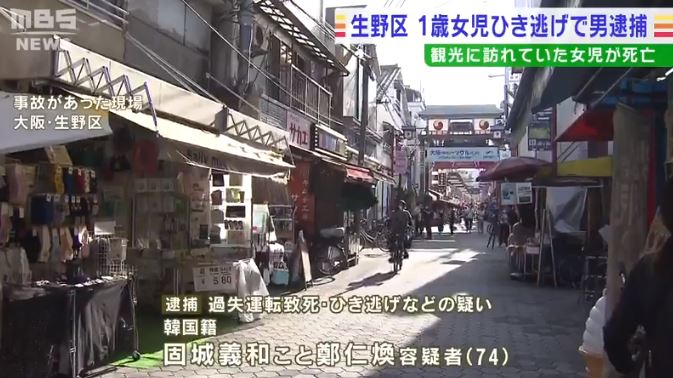 Arrested on suspicion of negligent homicide and hit-and-run driving, among other charges, was Jung In-hwan, 74, a Korean national living in Higashiosaka City, Osaka Prefecture, who is known as Yoshikazu.

According to the police, the suspect is suspected of hitting 1-year-old Ai Nakayama, a tourist from Nagoya, on a city road in Momoya, Ikuno Ward, Osaka City, shortly after 11:30 a.m. on August 1, and then fleeing the scene.

Ai Li was rushed to the hospital, but was later confirmed dead. The suspect, Yoshikazu, denied some of the charges, saying, “I got out of the car but did not see the child.”

The car driven by the suspect, whose vehicle inspection and liability insurance had expired, got out of the car after the accident, but got back in and fled.