AICHI – On the afternoon of November 7, an accident involving six passenger cars in Nisshin City, Aichi Prefecture happened. One woman whose driving from the first collision died of an illness. 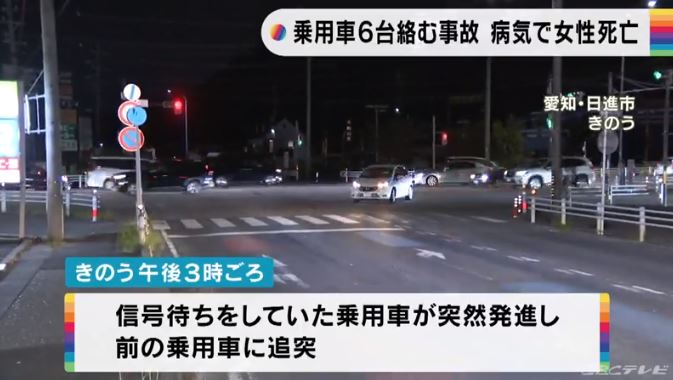 At around 3:00 p.m. yesterday afternoon, a car waiting at a traffic light at an intersection in Hongo-cho, Nisshin City, suddenly started and rear-ended a passenger car stopped in front. The car then hit an oncoming car and a car in the same lane, resulting in a total of six vehicles involved in the accident.

According to the police, the 75-year-old woman driving the car that caused the initial rear-end collision was rushed to the hospital, where she died approximately one hour later.

The cause of the woman’s death was aortic dissection. Before the accident, the woman’s 74-year-old husband, who was in the front passenger seat, grabbed the wheel quickly, but was unable to prevent the accident.