Mother, arrested for stabbing 4-year-old daughter with a knife in Kagawa

KAGAWA – A mother was arrested by the police for stabbing her 4-year-old daughter using a kitchen knife in Shodoshima Town, Kagawa Prefecture. 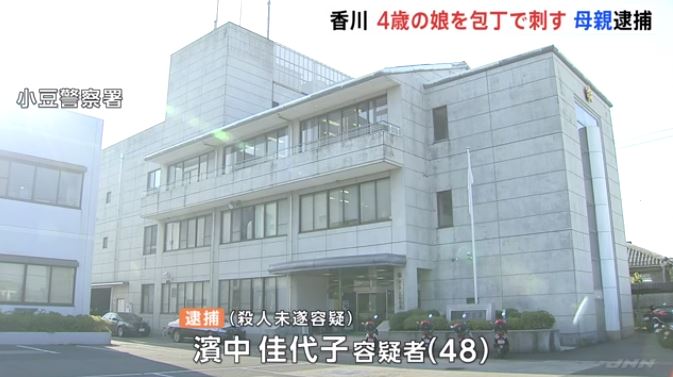 Mother, arrested for stabbing 4-year-old daughter with a knife in Kagawa (TBS News)

The suspect, Kayoko Hamanaka, 48, was arrested on suspicion of attempted murder.

According to the police, Hamanaka stabbed her daughter once in the back using a kitchen knife while inside their car that was parked in a vacant lot in Shodoshima Town yesterday. The daughter was stabbed in the left shoulder blade and will be injured for about a week, thankfully, her injuries are not life-threatening.

Hamanaka’s husband found the suspect and the victim injured in the car. The father’s relatives called the police and reported the incident. At the time of discovery, Hamanaka also had a stab wound on his chest.

In response to the police investigation, Hamanaka admitted to the crime. The police are investigating the motive.