Minicar rolls over due to overspeeding, 3 people, dead in Chiba

CHIBA – A minicar overturned at an intersection in Futtsu City, Chiba Prefecture, earlier today, killing three passengers, a man and a woman. 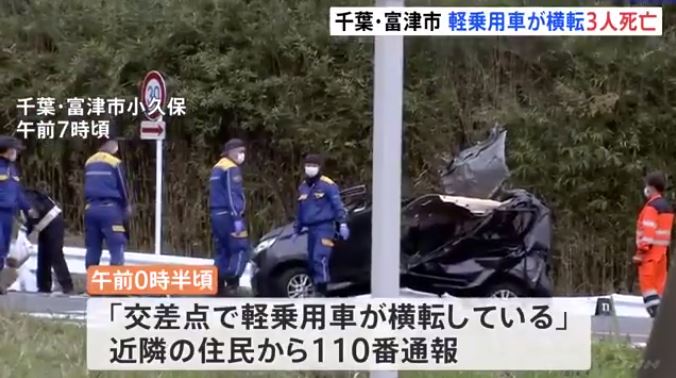 Minicar rolls over due to over speeding, 3 people, dead in Chiba (TBS)

At around 0:30 a.m., a nearby resident called 110 to report that a minicar had overturned at an intersection on a national highway in Kokubo, Futtsu City.

According to the police, the minicar is believed to have hit a guardrail at the intersection and was overturned and wrecked.

There were four people in the car, a man and a woman in their late teens to early twenties, and two of them, a man and a woman, were confirmed dead. One woman was injured and is receiving treatment at a hospital.

The scene was a gentle left curve, and the police are investigating the cause of the accident, believing that the car may have been driving too fast, failed to make the turn, and overturned.