SAITAMA – A male junior high school student was found unconscious inside their house in Shirooka City, Saitama Prefecture. He had bruises on his face, and the police are investigating on suspicion of abuse. 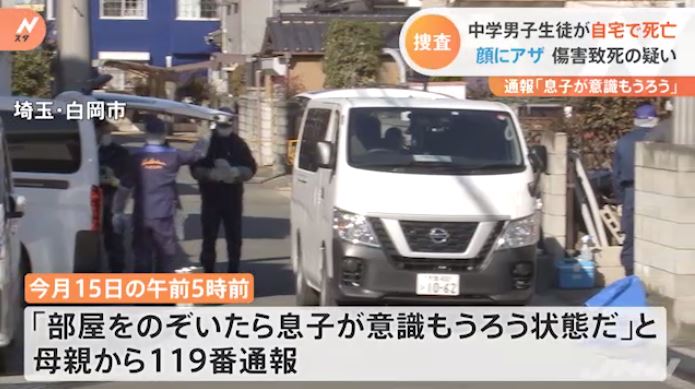 Just before 5:00 a.m. on the 15th of this month, a mother called 110 at a house in Shirooka City, Saitama Prefecture, saying, “I looked into his room and found my son in a dazed state.”

The emergency services rushed to the scene and found Sota Kato, 15, a junior high school student, lying unconscious on a futon in the living room on the first floor, and he was rushed to the hospital, where he died on the 18th.

According to the police, Kato had bruises on his face and other external injuries on his body.

People who live in the neighborhood
“It’s like a couple living together with seven or eight children.”

Neighbor
(Q. What did the police tell you about him?) “He was injured, someone beat him up. He was a good brother who loved his siblings very much. I was shocked.

As a result of the autopsy, the cause of death was an acute subdural hematoma, and the police are investigating on suspicion of abuse, believing that the victim was assaulted.