More than 62,000 new cases of the new coronavirus have been announced nationwide on yesterday. This is the first time that the number of newly infected people in Japan has exceeded 60,000. 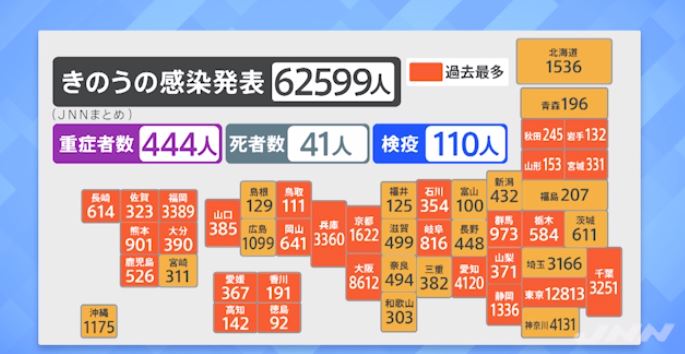 The Tokyo Metropolitan Government announced on Tuesday that 12,813 people were newly infected with the disease, surpassing last Saturday’s figure of 10,227 to become the most infected on record. This is a 2.5-fold increase compared to the same day a week ago. The hospital bed utilization rate was 39.8%, up 3.1 percentage points from the previous day.

A record number of cases were reported in 29 prefectures, including Osaka, Hyogo and Fukuoka. The number of newly infected people nationwide was 62,599. This is the first time that the number has exceeded 60,000, making it the highest number ever.

The number of critically ill people hospitalized nationwide was 444, up five from the previous day. In addition, 41 deaths have been announced.