More than 60,000 people infected with corona nationwide on Monday, the highest number in Japan, and the hospital bed utilization rate in Tokyo exceeds 49%

The number of people infected with the new coronavirus exceeded 60,000 nationwide on Monday. This is the highest number ever for a Monday. 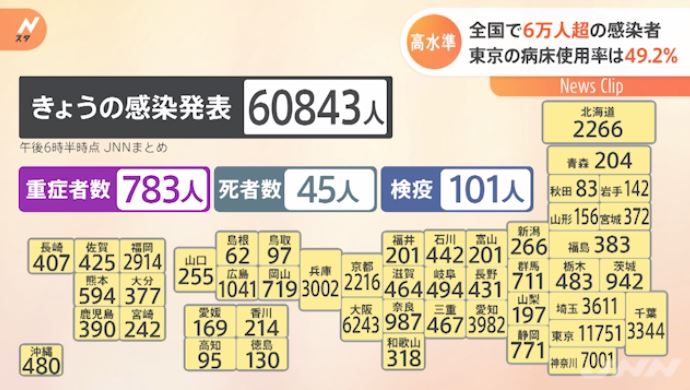 More than 60,000 people infected with corona nationwide on Monday, the highest number in Japan, and the hospital bed utilization rate in Tokyo exceeds 49%. (JNN)

On the 31st, the number of newly announced cases in Tokyo was 11,751, the highest number ever for a Monday. The hospital bed utilization rate rose 0.7 percentage points from the 30th to 49.2%.

If the number of inpatients increases by another 55, the utilization rate of hospital beds will exceed 50%, which is the threshold for Governor Koike to consider requesting an “emergency declaration”

The number of infected people hospitalized nationwide who are considered seriously ill is 783. Forty-five new deaths have been announced.