More than 80,000 people infected with corona nationwide, the most ever on a Tuesday, with 70 deaths.

More than 80,000 new cases of coronavirus were reported nationwide on Tuesday. This is a record number for a Tuesday. 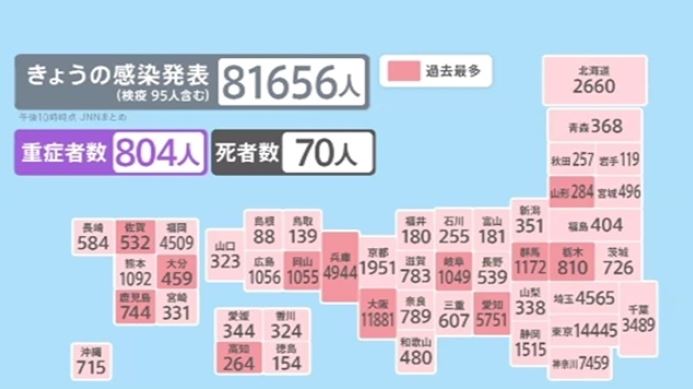 More than 80,000 people infected with corona nationwide, the most ever on a Tuesday, with 70 deaths. (JNN)

The number of newly infected people in Tokyo announced on Tuesday was 14,445, the highest number ever for a Tuesday. The hospital bed occupancy rate increased by 1.5 percentage points from the previous day to 50.7%, exceeding the threshold of 50% that Governor Koike had said he would consider requesting a “state of emergency” declaration.

Nationwide, 81,656 people have been reported to be infected, a record number for Tuesday. A record number of cases were reported in 12 prefectures, including 11,881 in Osaka.

The number of infected people hospitalized nationwide who are considered seriously ill has increased by 21 from the previous day to 804. Seventy new deaths have been announced.