A man on a black bicycle, arrested for touching a woman’s buttocks in Roppongi late at night.

TOKYO – Late at night on the 28th of last month, a 42-year-old man was arrested for touching the buttocks of a woman in her 20s who was walking on the streets of Roppongi, Tokyo. 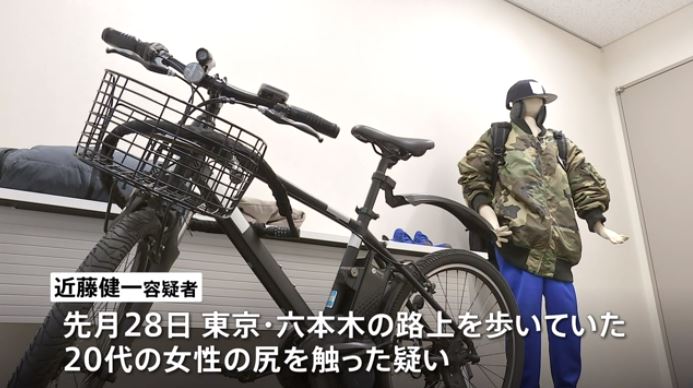 A man on a black bicycle, arrested for touching a woman’s buttocks in Roppongi late at night. (JNN)

Kenichi Kondo, 42, an employee of a restaurant in Setagaya Ward, was arrested on suspicion of touching the buttocks of a woman in her 20s who was walking on the street in Roppongi, Tokyo, just after 11:30 p.m. on the 28th of last month. The suspect, Kondo, committed the crime when he passed the woman while riding his electrically power assisted bicycle.

According to the Tokyo Metropolitan Police Department, Kondo has admitted to the investigation that he “went into a narrow street to make sure there were no people around and committed the crime” and that he “likes women’s buttocks.

There have been at least six other similar incidents involving men riding bicycles in the Roppongi area since around April of last year, and the Metropolitan Police Department is investigating the connection.