Suspected of killing his dog after a quarrel with his wife, knocking it against the floor and walls multiple times.

AICHI – An unemployed 45-year-old man was arrested on suspicion of killing his dog by slamming it against the floor and wall multiple times after a marital quarrel. 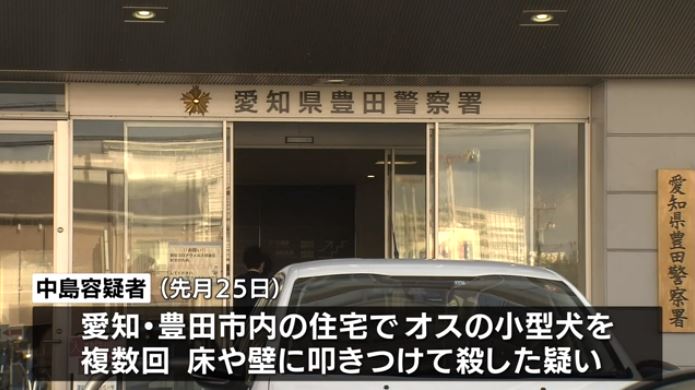 Suspected of killing his dog after a quarrel with his wife, knocking it against the floor and walls multiple times. (JNN)

The suspect, Hajime Nakajima (45), an unemployed man with no fixed residence, was arrested on suspicion of violating the Animal Protection Law.

The suspect is suspected of killing his small male dog, a Yorkshire terrier, by slamming it against the floor and walls multiple times at a house in Toyota City, Aichi Prefecture, where he was living with his wife at the time.

The incident was discovered when the wife reported that she had a dispute with her husband and that he had thrown her dog to death. The dog had spinal cord and brain injuries, and its skull was caved in.

When questioned by the police, Nakajima denied the charges, saying, “I was drunk and don’t remember.

Nakajima has four dogs and 13 cats, and the police are investigating whether there was any other abuse.