Man, arrested for grabbing a 3-year-old girl by the arm, and for threatening her mother to steal money

TOKYO – A 23-year-old man has been arrested by the Tokyo Metropolitan Police Department for grabbing a 3-year-old girl by the arm and pulling her away from her mother on a street in Koganei City, Tokyo, threatening her mother to steal her money. 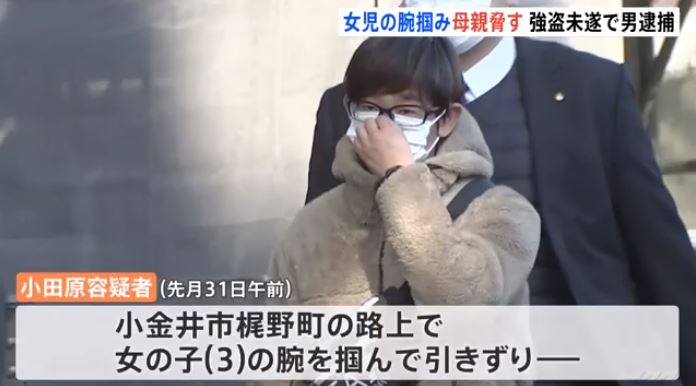 Man, arrested for grabbing a 3-year-old girl by the arm, and for threatening her mother to steal money (JNN)

The suspect, Haruki Odawara (23), a part-time worker in Koganei City, was arrested on suspicion of attempted robbery.

On the morning of January 31, Odawara allegedly grabbed a three-year-old girl who was walking with her mother (43) on a street in Kajino-cho, Koganei City, dragged her by the arm, told her to surrender her money if she doesn’t want to lose her child’s life.

According to the Tokyo Metropolitan Police Department, Odawara and the child were not acquainted with each other, and he suddenly attacked the girl (3), but the mother resisted and fled without taking anything.

When the suspect was questioned, he partially denied the charges, saying, “I saw a girl and grabbed her arm to play a prank, but I don’t remember what I said to her mother.”