Train station staff, slightly injured when his arm was cut with a knife by an unknown perpetrator then escapes

GIFU – A station worker was injured when a man cut him with a knife as he entered the rest room at Ogaki Station on the Yoro Railway in Gifu Prefecture. The man is still on the run. 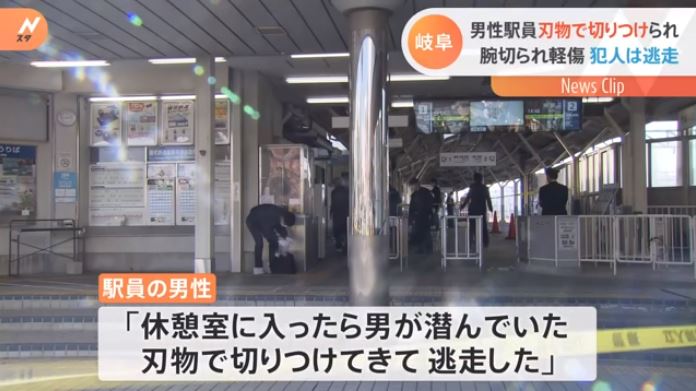 Train station staff, slightly injured when his arm was cut with a knife by an unknown perpetrator then escapes (N Star)

According to the Gifu Prefectural Police, at around 1:00 p.m. yesterday, a male station attendant was cut with a knife by a man who was in the rest room for cleaning work at Ogaki Station on the Yoro Railway in Ogaki City, Gifu Prefecture. The man was cut near his left arm and is believed to have suffered minor injuries.

The man who cut him fled the scene in a southerly direction, and the police are searching for him. The man was about 165 centimeters tall, of thin build, wearing a black eye patch and black clothes.

The man, who works at the station, said, “I went into the rest room and saw a man lurking there. He slashed me with a knife and fled,” he said.