Chiba Nishi Police officer arrested on suspicion of colliding with a man on a motorcycle, killing him

CHIBA – On the morning of the 16th, in an accident where a van and a motorcycle collided at an intersection in Chiba City, killing the man on the motorcycle, the police arrested a police officer from Chiba Nishi Police Station who was driving the van. 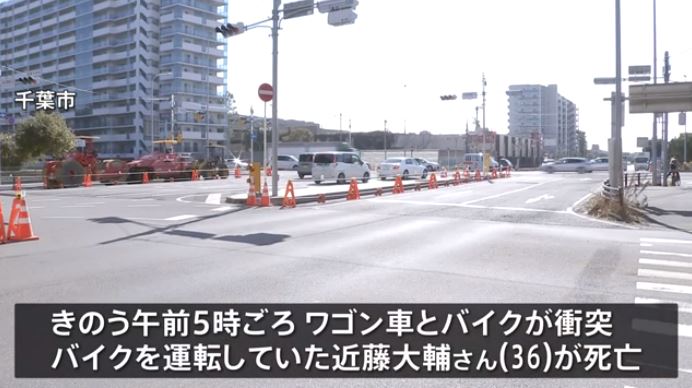 Chiba Nishi Police officer arrested on suspicion of colliding with a man on a motorcycle, killing him (TBS News)

At around 5 a.m. on the 16th, a van and a motorcycle collided at an intersection in Hanamigawa-ku, Chiba City, killing Daisuke Kondo, 36, who was driving the motorcycle. The police have arrested Shogo Oshima, 27, a sergeant in the regional division of the Chiba Nishi Police Station, who was driving the van on suspicion of manslaughter by negligent driving.

According to the police, the accident took place at an intersection with traffic lights about 100 meters from the police station, and the suspect, who was on his way to work, called the fire department himself after the motorcycle crashed into the left side of the van. The suspect, Oshima, has admitted that he is sure that he caused the accident, and the police are investigating the details of the accident.

Following the arrest of the police officer, the Chiba Nishi Police Station commented, “We will provide thorough guidance to our officers and strive to prevent any recurrence.